In which No.1 tries to break his Arm

It has been a lovely day.

The in laws are dog sitting for their friends again, but are returning home next Saturday, so we decided to have an Easter Sunday dinner with them a week early.

The lamb roast was delish, the pavlova scoffed to the last crumb, the sun shone, and the necessary French cricket match was as funny as only a silly family tradition can be.

But as the afternoon wore on, it became apparent that enough was enough – No.1 started to get tetchy, arguing over each point won/lost (he actually said “you cannot be SERIOUS! It was OUT!” and didn’t understand why the grown ups all collapsed with squeaks of giggles).

Eventually, we called it a day – Boy and Jolly carried on playing football, and NO.1 retreated indoors. In high dudgeon.

Then there was a shout.

I went upstairs (slowly – am too used to his histrionic melodramas) to find him sprawled on the office floor – he’d come rushing through, caught one foot in his other trouser leg and gone sprawling, cracking his arm on the radiator.

Small bruise showed, so I was dutifully sympathetic, gave him a hug, and told him it’d feel better soon – just go rest up for a while. We know his hyper-sensitivity to pain causes him to over react to the slightest thing, so I was rather unconcerned and went to put the kettle on.

He appeared in the kitchen 15 minutes later still in tears. White face. Unable to move his arm.

I dosed him with nurofen, applied a pack of peas (frozen ones, not some mystical cure from Sunday roast left overs), and sat with him for a while.

It soon became apparent that this was the real thing – or as close as we’ve ever come to it.

Not a single hospital dash for children before; we’ve got off lightly, I think.

C packed him into the car, and headed for A&E. In laws went home, I rounded up the smaller troops for some tired TV before bed.

Small drama followed when C rang to say there wasn’t an A&E at weekends at our local (9 miles away) hospital. What?

Had to call the emergency contact number o the door, to find the nearest is Dorchester. 25 miles away. *sigh*

So off they pootled.

Turns out he’s tried very hard to break it, but not quite managed it, just mashed the growing plates together in his wrist. Very painful, treated as a break with a splint, but will heal quicker and no need for plaster.

One VERY sorry for himself boy now sleeping in bed.

Two rather frustrated parents wondering how the heck he’ll manage to actually stay in school, let alone write his exams in 10 days time… 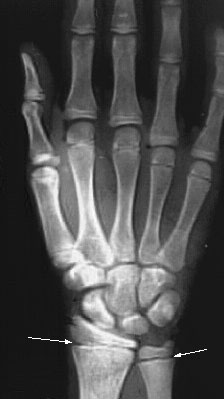