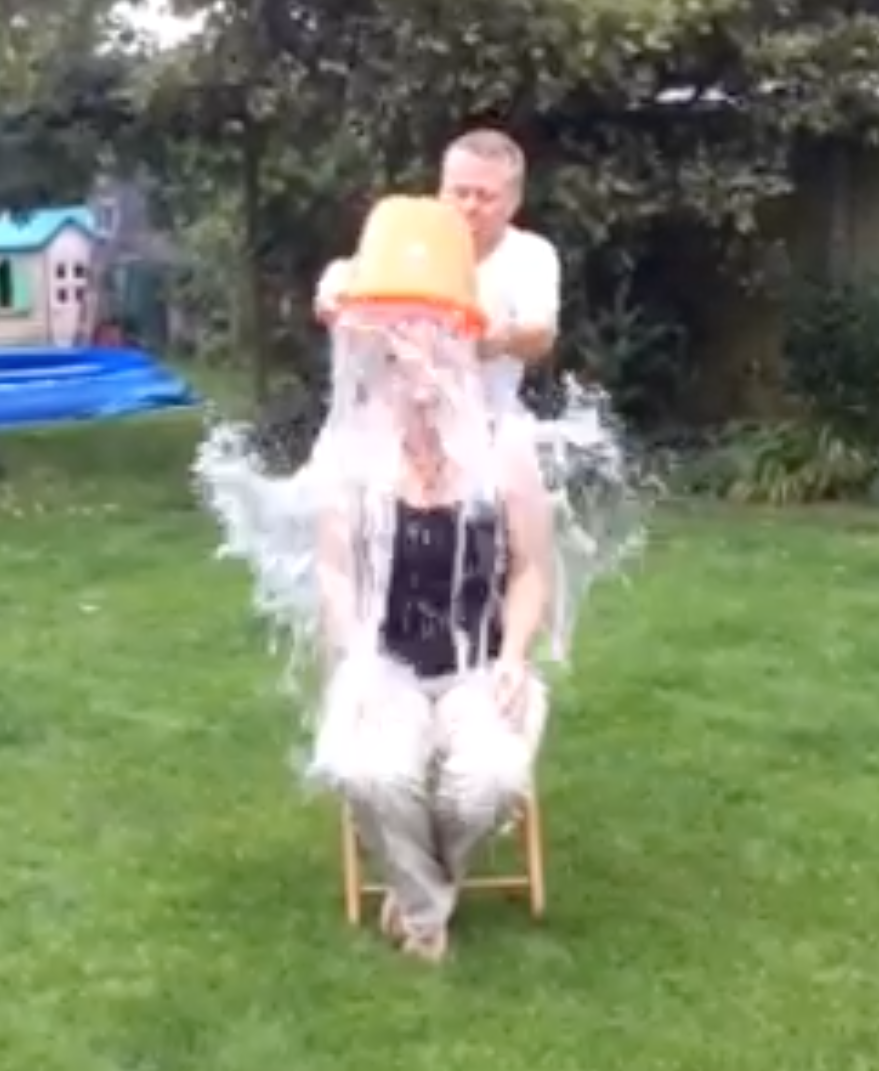 Why I did the Ice Bucket Challenge

The Ice Bucket Challenge started in stupidity. I admit it; I rolled my eyes and shook my head at the ridiculously-silly celebrity band wagon, but I also reasoned that if they were donating, then good for them. Who knew it would roll on and become so big? We watched a few, laughed at a few, tutted at a few… and actually started to switch off from them as they became more frequent in my social media timelines. Then this week I was challenged. I could have ignored it, I could have just donated quietly. But I didn’t. I did it – rather embarrassingly, I screamed like a banshee as I did so. And I was happy and proud to do it.

But this post has been bursting to come out of my brain on the back of it. Because I’ve seen increasing amounts of sneering and dismissive and judgemental comments on social media (and mainstream media) about the Ice Bucket Challenge – why it’s a silly bad thing, why if you’re keen to take the moral high ground you should definitely NOT do it as it goes against everything that is good about charity.
I’ve seen people claiming it wastes water.
That ALS are an evil corporation that waste all the money people donate.
That donating to disease-specific causes is a wasteful way of donating.
That it accomplishes nothing and is yet another talk-and-feel-good-but-do-no-real-good social media whirlwind.
And possibly, those things are true.
Waste water? Yes… but the UK isn’t exactly short of water, is it? And my bucket in Dorset will in no way EVER benefit places where drought is a very real and serious problem.
ALS don’t put all the donations into research? No, probably not. No charity is perfect, and the bigger they are, the harder it is for them to retain control of every donation and direct it to where the giver wants it to go (think Comic Relief and the arms-buying…). But that does not equate to them doing no good with it, either.
Donating to disease-specific causes is a waste? That’s harder. It may be that the actual value for your pound is less – I really don’t know the answer to that one (though it seems to me that specialising and targeting usually makes anything more effective in the long run). The thing is, people react and donate when they feel something. So any charity will try really hard to tug on your heartstrings to make you dig that bit deeper. Which is why charity marketing is all about wasted abused animals, big sad-eyed starving children and desperate people in grief-drowned circumstances. In a world that is blind to advertising, and blasé about suffering, they have to find some way to reach you. To touch your emotion. To get you to do more than tut sadly and move on. To act. And a bland generic all-encompassing campaign will never work in the same way that sad puppy eyes asking for a pet donation will, or an African child drinking a clean glass of water will make you give to a Clean Water campaign.
But to say that it accomplishes nothing?
That’s where I disagree. Because (unlike many social media whizz-bang-pop campaigns I’ve seen over the years), the ice bucket challenge is accomplishing something. People actually ARE raising money and awareness. People ARE donating.
More than $94.3 million (£56m) has been raised through ice bucket donations for US charity The ALS Association compared to $2.7 million (£1.63) during the same time period last year. For those on the don’t-waste-water argument, WaterAid has also seen a surge in donations, with many choosing to donate instead of wasting water. Here in the UK, more than £3.5 million has been donated to the UK charity MNDA (which is where our own money went); a seven-fold increase in donations in August compared to a standard month last year. Douglas Graham, director of fundraising at MNDA, told the Telegraph

“We received an average of 13,000 donations a month last year. From the Ice Bucket Challenge we have now had over 600,000 donations.”

So on a grand scale, Good Things have come from this internet phenomenon. Just because something is trending doesn’t make it automatically bad.
On a personal level? As a family we’ve donated money that we would never have reached into our pockets and given. We donate regularly – we’re not anti-charity. It’s just that we had never really considered this particular charity before. So making it fun and silly grabbed our attention. It has also meant that we have had conversations with our children about Motor Neurone Disease. We have discussed why it’s an ice bucket challenge (it’s to represent the loss of feeling that people with MND suffer – did you know that? It’s kind of been lost in the message).
Our internet savvy children have watched a ton of their favourite YouTubers and gamers and celebs take part – and they’ve also read all the anti-statements about why you shouldn’t do it.
Consequently we’ve talked long and hard about large charities and corporations. Why all donations can’t immediately be spent on helping sick people. Why research costs so much and takes so long. We’ve talked about other disease campaigns, like red ribbon and pink ribbon campaigns for AIDS and breast cancer, and how effective they’ve been, how they’ve helped. How even making people talk about a campaign can help. What awareness IS.
We talked about how the science research works – why it takes so long and what they actually physically do.
We talked about disability generally – how treatment and social attitudes have changed. How 100 years ago a great mind like Stephen Hawkings’ (whose video is an essential watch, incidentally) would never have been allowed to develop as he would have been locked away from society, possibly even ‘helped to die’ as a child as he had no prospect of ‘a life’.
We’ve talked about being judgemental – about making assumptions, and believing everything you read, and how it’s not for us to judge any other persons decision to donate, or not to donate. To do it, or not to do it.

And yes, some will do it for the crack, and not ever mention the donation, never give money, never understand why they’re doing it. But others won’t. And for every single person who gives a little of their hard-earned cash (to ANY charity at all), then all the silliness and stupidity is worth it.
And THAT is why I did the ice bucket challenge.