After the fretting of the longest week in history, the labour pains finally stopping completely on the Saturday night was, to be honest, a relief. I got a good nights sleep, and finally settled in my mind that Plum was never ever going to make it out unassisted.
The itching was bad again, and I suddenly knew, deep inside, unequivocally, that today was the day, the caesarean was the right way to go, and actually… I was finally okay with it.

So we got to the hospital for 10 o’clock, and announced our intention to have the op today. They only had me down for monitoring – was booked for the c/s Monday. But I wasn’t about to hang around, risking the cholestasis, now I had made up my mind; C was distinctly nervous and could not bear stretching his nerves to another day, and the doctors were so glad to finally have me in agreement that they jumped to say yes before I changed my mind again.

Being Sunday, the ward was quiet, none of the weekday hustle going on, which was nice. But also being Sunday, we had to take our chances with the anaesthetist. By 11 it turned out she was dealing with emergency theatre, and wouldn’t be available till mid afternoon. Now, bearing in mind that on Friday I had missed lunch to go to the clinic, ended up shooting off to hospital and didn’t eat till I got back home at 8.30 that night. Then I fasted Saturday as I was probably going to have the op Saturday, and again didn’t eat or drink till late afternoon. Then fasted again in preparation for Sunday… By lunchtime Sunday I was sooo thirsty I would have drunk sea water and was beyond the point of being hungry! Midwives kept C supplied with plenty of cups of tea, though. Nice and thoughtful of them, I felt. Harumph. 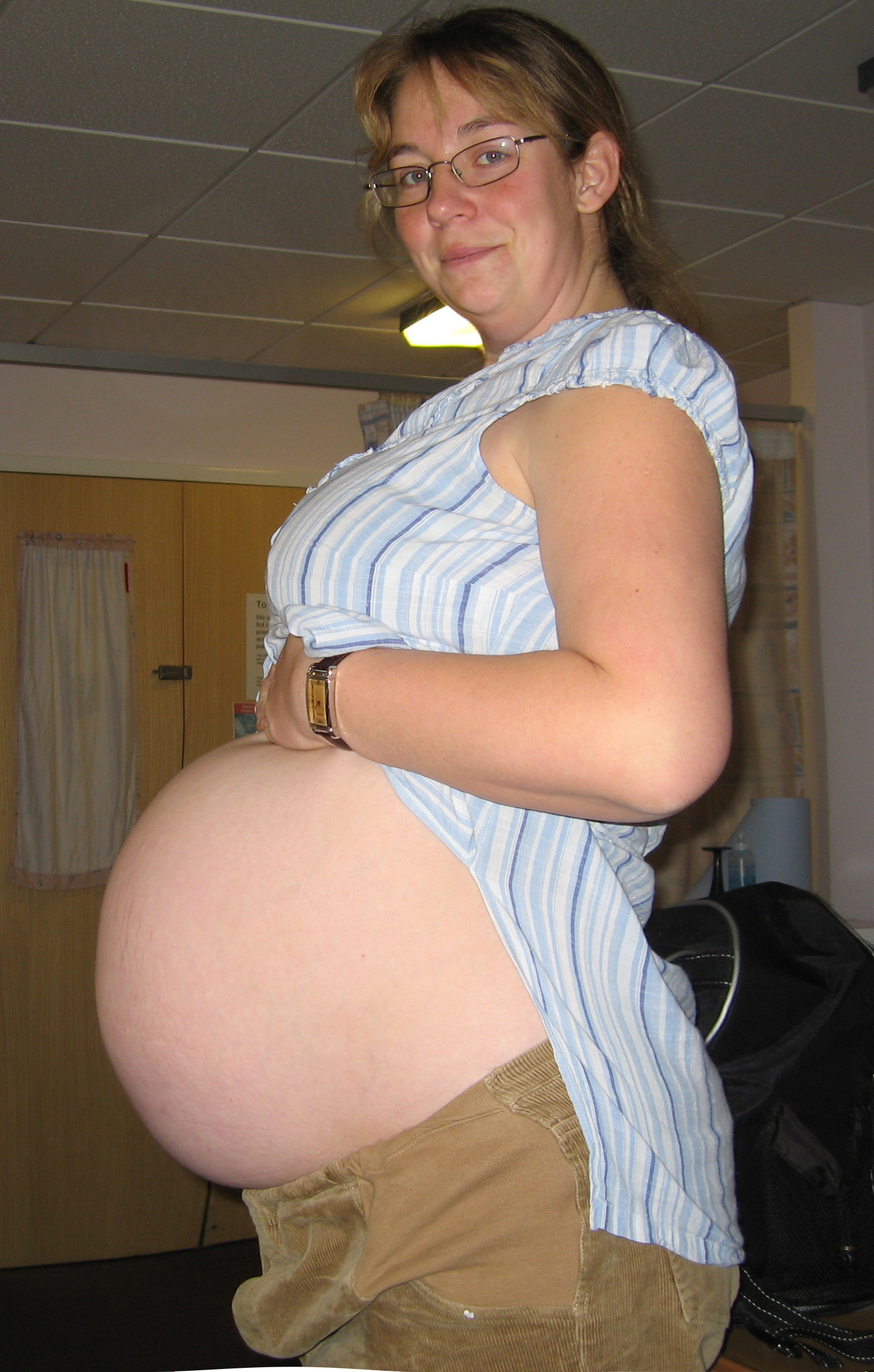 Around 1p.m.  I had the IV drip inserted, as they were worried about me dehydrating. However they didn’t fit the actual drip till gone 2 when the consultant also visited to say they were expecting to be in theatre by 3.

The waiting around was a killer, to be honest, and made me really nervous and snappy and edgy. Not helped by the fact that I could hear a couple of women in ‘proper’ labour somewhere nearby, and I was suddenly hideously jealous and resentful of their ability to have their babies ‘normally’. Had a couple of tearful spells, but on the whole I was resigned and cheerful and calm about the whole thing.

The midwife and surgeon read my birth plan, and were more than happy with it, congratulating me on being so well organised (thanks to a knowledgeable friend or two!). The midwife asked about handing the baby to me when it was born, but I wanted C to hold Plum first – I’d rather wait until I was sewn up and sorted before having a cuddle myself.

About 2.40 C climbed into his scrubs, the midwife appeared and did a few checks, the surgeon did the last minute scan (said it didnt feel like a head under my ribs. I was under no illusions, however, this baby was NOT for turning!), and it appeared Plum had shifted yet again. Now lying transverse, bottom raised off the cervix (hence the labour pains stopping again), and no way no how coming out the usual route. Felt weirdly reassuring – like confirmation from Plum that the section was totally the right way to go.

Before I knew it we were walking down to theatre – a small bright, sunny room, which felt immensely cold to me. I sat on the edge of the bed and shivered as they began their preps, everyone coming and saying hello and introducing themselves and being incredibly cheerful and friendly and relaxed.
My Patrick Hawes CD was put on (was SO glad with my choice, the minute I heard the familiar floaty music I relaxed and listened, tuning out the bustle around me). The spinal was easy, the warm tingling sensation just plain weird.
I was laid down, the warm tingling sensation spread to my feet and I felt like I’d been sitting on them for too long. I kept trying to twitch them to get the feeling back only I couldn’t of course, it really was the oddest feeling. My stomach was painted a delicious pink colour, C was cheerfully chatting to the anaesthetist whilst squeezing my hand really tightly. The screen was put up and we were away.

At this point I suddenly felt afraid and nervous and very panicky. C was sitting right next to my head, and he leant close into me so that I could feel his strength and warmth and nearness, gazed into my eyes and said
“So. Where d’you fancy going on holiday this year?”
Which was such a ridiculous and pathetic ploy to distract me that I laughed in spite of myself. Clever ole stick, my man. Once he’d gained my attention, I stopped threatening to pass out with fear and relaxed, explaining to him that I could feel a little shoving and prodding. The anaesthetist said ‘oo, I can see a bottom!’ to which a chorus of other voices shouted “Dont say what it is!”
Anaesthetist looked all affronted and huffed “I know this! I read the birth plan too!”
We heard a tiny half-baby-cry noise, and looked at each other, both saying “was that…”
And suddenly there appeared at C’s shoulder a midwife, carrying a baby in a towel. C took the bundle, as the fact that my baby was here hit me. It felt weird, much too fast, and yet in slow motion. As he took the baby and gently unwrapped the towel, my head was saying ‘Oh my goodness! A baby! Its a baby! Its a baby!’

C looked up at me and whispered “Its a girl! A baby girl!” then loudly to the room at large “We have a baby girl!! Its a GIRL!!!” He wrapped her towel back round her and held her for a minute for us both to gaze at her cross, rumpled, damp face before relinquishing her to the midwife for a clean dry towel. We just looked at each other, completely dumbfounded, murmuring to each other
“We have a baby girl! We did it! We have a daughter!!” 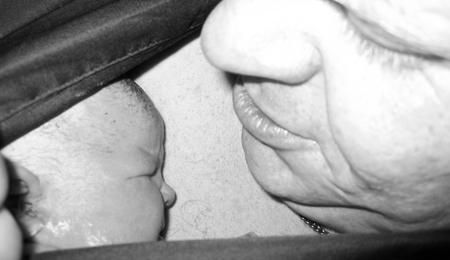 A minute later the midwife was back with C, and told him to lift his shirt. Without really comprehending, he did as he was told (though rather baffled) – and a minute later Bear was curled up against her daddys skin inside his scrubs. I could just see her face peeking out of his neckline. I managed to take the camera from Cs pocket, hold it up and get a picture of her in there whilst I was being sewn up!
She then decided that actually she was pretty cross at the whole entrance-and-welcome scenario, and she started to roar. She was furious!
It was a strangely beautiful time. C sat close to my head, the screen in front of us, a machine behind us, and despite being in a room full of people with at least two of them up to their forearms in my innards, it was an incredibly intimate, peaceful, private time. Everything else faded away, and there was just we three existing in that moment in time – me, my beloved husband, and our new, precious, beautiful, utterly ferocious daughter. 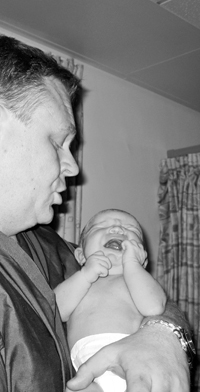 Within a minute or two it seemed that we were done, that special moment lost forever to all but our memories. The noise and bustle in the room increased, the screen was taken down, and I was disconnected from the machines. The staff all congratulated us, Bear was removed from daddys top (increase in volume) and nested in next to me on the bed. I’d like to say she ceased crying instantly, but she merely looked at me in anger and continued viciously announcing her displeasure. I was wheeled back to my room, where Bear was weighed and checked before being handed back to C whilst I was sorted and made comfortable. I begged for some water and was allowed one mouthful (oh the bliss!). 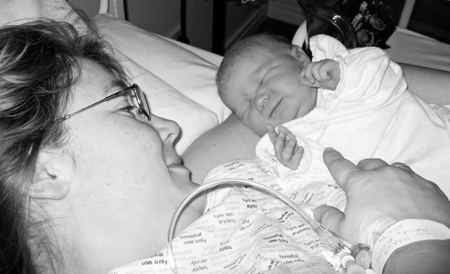 I took Bear back and with help managed to position her for a feed. She was no natural, unlike the boys, and took a good ten minutes of patient instruction and nipple waving before she got the idea… and silence reigned. The midwife melted away, and there we were. Finally. No more baby Plum – Bear Madeleine Kay had eventually deigned to join us, at 3.14 on Sunday 21st January, weighing in at exactly 9lb.
An hour later, I actually got to drink the finest cup of tea that has ever been made.