Three weeks ago, we figured there was just enough time to whizz the mower over the grass before the lasagne was ready.
C hefted it from the shed, and managed to start it up despite the tennis elbow. I saw him wince, and knowing deep in my soul that mowing would take 4x as long if I were in charge of the starter cord (most things I’m good at if I set my mind to them. The starter cord on the mower? I am incompetent), we worked a foolproof plan to save his arm.
When the grass box was full, he’d stand still and hold the handle to keep the motor running, whilst I ducked in, pulled the grass box off the back and emptied it.
Simples.
Only, as we operated this procedure, chatting over the mower engine roaring, a large clump of glass rolled out of the box and back down the shoot towards the blades spinning so fast I couldn’t actually see them.

Naturally, my best and most sensible course of action at that precise moment was to thrust my hand in down the chute to catch the renegade grass bundle.

Next thing I knew, there was an odd mechanical flickery whirring noise, a numbing sensation in my hand, and a really loud screaming sound in my ears. On the second scream I realised the noise was mine, and that I’d just done some proper damage to my right hand.

Snatching it away, I gripped three fingers tight in my left hand, and in a high-pitched voice tried to calmly informed C and No.1 son who was in the garden with us that I thought I’d just taken the top off my finger.

There was no real pain, it was just hot and numb – and very little blood either. As we got into the kitchen a neighbour appeared on the doorstep, having been alerted by the scream and come running. Thank goodness for kind neighbours.

C and No.1 were in proper panic mode – I know now that both heard my scream and thought I had removed all of my fingers. It took some loud and calm shouting from me before they understood they didn’t need to go looking for severed body parts, just help me out a little.

A quick glance told me that only one finger was damaged. It was still vaguely intact, but looking pretty bad and definitely in need of medical assistance. Wrapped safely in a frozen bag of green beans and a tea towel, C drove me to the nearest A&E, 20 miles away in Dorchester.

At A&E the wait time was advertised as 2hrs – at which I felt rather faint; shock was settling in, and I was starting to tremble. I was sitting in the waiting room for maybe 5 minutes when a nurse called my name – clearly the waiting time is a moveable feast depending on what your problem is.

The nurse unwrapped the tea towel and beans (no longer frozen, and starting to smell veg-like), and gave an impressed and sympathetic “oooh…”, before declaring she needed to get a doctor to take a look.  I didn’t want to see, but C had a good peer, and actually brightened up

“Oh! That doesn’t look so bad as I expected!”

In the end, I was brave enough to look myself, and he was right. NOT as bad as I expected.

Various nice people came and went. I had the finger bathed (pain started to increase at this point), and my ring had to be cut off so that I could have an injection to numb the finger. Around here I presume the adrenalin wore off, as I felt very shaky, and don’t mind admitting I clung on to C and had a bit of a messy sob. Thankfully he’s a man who’s magnificent in a crisis (once he’s dealt with the shock of seeing his wife pulp her hand).

No.1 was also amazing – sorting out dinner for his siblings and cleaning up afterwards, putting the youngest to bed calmly and cheerfully, and then standing by on the phone to hear updates, and stay up till at least one of us was home safely.

The very lovely A&E doctor (whose name, to my shame, I have forgotten) showed us the X-ray. I wish I had taken a photo, it was so clear and descriptive of the damage I had done. He said he wouldn’t touch the finger, and that after they had cleaned and dressed as best they could I could go home, but was to report first thing the following morning to the Plastic Surgery dept. at Salisbury hospital. He wouldn’t touch a thing, as he didn’t know what they wanted to do, so best leave it all to them.
He did, however, warn me gently and kindly that he couldn’t see them saving the top of my finger.

A mostly comfortable night later, and I was back out again. Same finger, new hospital. Thank goodness for amazing neighbours and wonderful friends who drop everything in a crisis – worries about childcare simply didn’t happen, leaving C free to look after me. And thank goodness for amazing children who rise to an occasion and reacted with a maturity way beyond their years.

The initial Finger Inspection provided an unexpected glimmer of hope – the Plastics team seemed to feel more of the finger may be salvageable than my fiend in A&E. They smiled modestly when I repeated his words that “they can do amazing things in Plastics that I know nothing about”.

I sat a lot of the day in a small stuffy room, I was fed and a head popped round the door occasionally to check that I and my fellow wait-ees were all doing okay.

Then my turn came – and it was mad. Surreal.

There I was, lying in an operating theatre in a gown but still with my shoes on, my arm stretched out beside me, scrubbed and painted and draped in a sheet. The nursers were reassuring, kind and lovely and helped me to relax.

And in walked the most lovely surgeon, bright and smiling and chatty. Miss McGuinness. Plastic Surgeon and Superhero. Happily for me, also a specialist in hands.

The anaesthetic kicked in to my hand, and I laid there and chatted and laughed with the team, whilst my finger was literally pieced back together.

Weirdest experience, to be so relaxed and cheerful.

She let me down just once. She told me that the long-lasting anaesthetic should last me though to the next day, possibly longer. At 3a.m. the following morning, just 12hrs later, I was in the most pain I have every experienced. It was so bad, my brain detached itself by trying to find words to describe it. ‘Sweetly pure’ and ‘scythingly excruciating’ was the best I could do. C called the emergnecy doctor who finally arrived equipped with morphine for me.

The top half of my top finger bone was smashed into gravel. It’s just gone. The still-existing top of my finger was simply tucked down and a new finger top created, my nailbed re-seated, and everything stitched up so neatly, that a stranger won’t even spot it in a few months time when the new nail grows. I’ve finished up with a finger 7mm shorter than it was – a little clubbier, but a whole lot more than I deserve.

I spent a week carrying my hand like it was a wounded animal. I nurtured and cradled it, like it was an attached but foreign creature. Steadily it has improved – remarkably fast, actually. 3 weeks on, and I wear no dressing, feel no pain (providing I don’t bash it), and a new nail is already starting to grow. 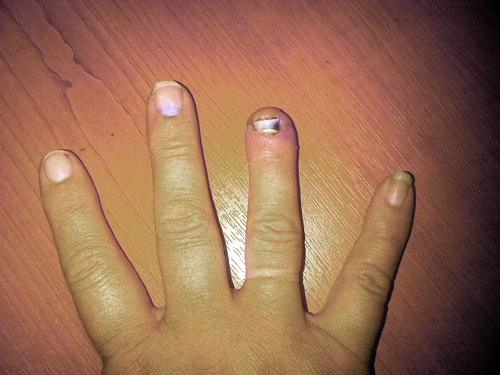 Throughout my time in the hospitals, I obviously had to constantly re-tell the story of why exactly I thrust my hand into a lawnmower. I met a lot of different people, and unfailingly I was met with the same response. No one called me an idiot. Not one – though clearly I deserved it. Just kindness, sympathy, gentle care and supreme professionalism.
They looked after me. They made me better. And they made me feel safe and nurtured while they did so.

But in both hospitals I encountered the type of stupid paperwork that makes you roll your eyes. On leaving both hospitals, I had to fill in a ‘how did we do?’ form. I had to say whether I would recommend the department to family and friends.
REALLY???

What kind of tin-brained scheme is that?

“I’ve just pulped my hand into a lawnmower, but no, I don’t want to go the nearest A&E right now. No no no. I want to head over to XX, because Joan said they were amazing.”

Dearest NHS – you saved me and I love you for it.

But please. Stop with the idiocy of the inane paperwork (I had to check into the hospital by recording every item of clothing on me. Never mind that the husband was about to go down to the car and collect a bag for me; no, that didn’t matter, it was what I had on me at that point that needed recording, in case I tried to sue the hospital for theft)… Just do what you’re good at – spend that paperwork money on more front-line staff, who you happen to train to be the very best in the world at what they do.
Then please – let them do what they’re good at.

Because they really are amazing.

How Do You See The Real Me…