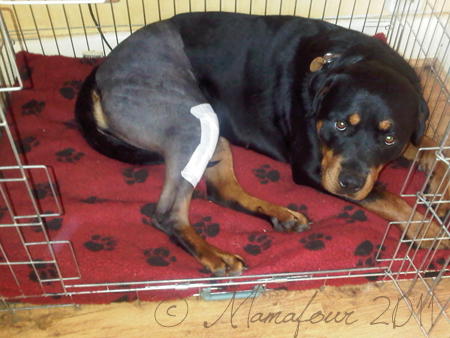 So, Blue has been limping since Easter.
At first we thought it was soft tissue damage – a couple of weeks rest and she was right again.

Until the next time.

Over the space of six months she spent half her time ‘resting’ with no walks, interspersed with her usual mad galumphing around the fields.

But the limp just never went away.

Anti-inflammatories helped, and eventually the vet said she needed a second opinion.

X rays were taken, mailed over to a nearby Vet Hospital (who have been totally amazing), and the diagnosis came back within the hour – she has wear on her cruciate ligaments in her knee, and she needs a Tibial Plateau Leveling Osteotomy.

Of course she does.

Basically, her cruciate ligament is a bit duff, is slowly tearing and isn’t holding her knee in place properly. So she needed to have the top of her tibia sliced off, swivelled, and replaced so that the top went from angled to level, meaning less stress on the ligament (if you’re that interested, you can read all about it here )

Oh, did I mention a  large metal plate would be involved?

Once this was done, she needed to be kept calm and still.

This is The Enthusiast we’re talking about here.

She’s not to walk anywhere except toilet breaks (on the lead) for 2 weeks, and then we start on 5 minute walks a day, increasing by 5 minutes every week.

The op was done two days ago – today she’s home, very quiet and VERY sorry for herself. But it went well, and she’ll soon be over the initial shock of the op. That’s when the fun will really begin, I suspect…

All I can say is All hail John Lewis and their Pet Insurance – the entire £7,500 bill was settled instantly without any issue. It’s going to be a LONG few months – for us as much as for Blue…

Holy Moly – I only went and won a trip to Disney!