That yawning chasm of a summer…

I sit here, I go through my photos, I start to create the posts… and time runs away with me. And so another week goes by with nothing recorded.

SO. I’m jumping back in again, and I’ll back-fill as I have time.

Yesterday was a Big Day.

No.1 had a rough start to Yr 8. He’s been dropped a set in three subjects, and his best friend and he fell out over the summer, so he spent a very lonely and sad first day back. He’s a bright bright boy – but out of the last three school years he’s maybe managed four full terms (if you add his entire attendance up; Last year he managed just THREE weeks at 100% attendance, and for the year he was at 43% attendance).
No wonder he has gaps in his Maths and IT knowledge, and his confidence in French is shaky. He was in-his-boots gloomy, very tearful and too emotional about it all.

Boy however had an excellent start to Yr 6. He was very scared, as he always is, starting a  new term, new teacher, new room. But he REALLY likes his new teacher. Who started the day with the words “I know some of you have been a bit apprehensive of coming into Yr 6 – but you really don’t need to be”. Music to my boys nervous ears.

Jolly did what Jolly does – shrugged, tipped his head on one side and said “yeah, it’s good. She’s nice. What’s for tea?”.

And Bear? My baby girl? She loves school. Naturally. Like everything she faced it head on with a confident sparkly grin and a pair of baggy socks. 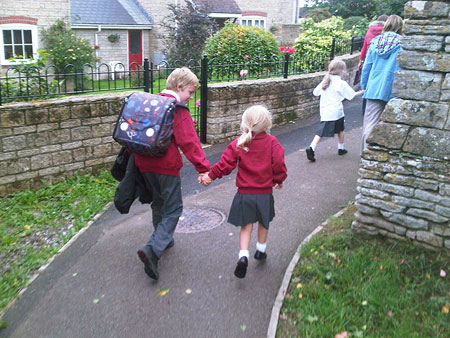 Today, No.1 had a MUCH better day. He had his first French lesson in the new (lower) set – loves his new French class & teacher, and for the first time doesn’t feel he’s struggling out of his depth. This is Good.

First P.E. lesson in what? Two years? Nearly three? It was circuits, and they just had to run around the large gym hall, see how many circuits they could complete. he let the pack of boys belt off, knowing he’d be slow, and just decided to do what he could.

he said the first three circuits were agony, and he nearly stopped when he thought his lungs might actually burst. But then some charming child muttered “come on then, fat boy”. And so he gritted his teeth and plodded onwards. And he said by lap 5, it was easy to just keep on putting one foot in front of the other.

In the end he ran almost 2km, lapped a lot of them and finished fifth out of 40-odd boys.

I’ll just pause for a second and absorb the way my insides just lit up as I typed that.

Remembering the way he was hovering in the kitchen when I got back from the school run, bursting to tell me, the shiny beaming of PRIDE on his face. Just… Magic. Priceless.

Apparently his PE teacher, who’s also head of year and has followed him closely over Yr7 couldn’t stop shouting out encouragement and praise.

Course, it’s now 9.30, and he can’t sleep because his legs are aching so much. Not, I think, the M.E. – just sheer objecting complaints from unused muscles!

And so. School really begins.