and I, of course, expected to feel nostalgic and wistful for that golden summer when my three tow-headed boys looked like this, and needed nothing more than each other. I saw my No. 1, bright, sparkle-eyed, fit and just bursting with beautiful health. Boy was dancing, jumping, running, fizzing with his endless energy and enthusiasm and saucy fun. Jolly was just so very hugely enormously solidly gigglingly wonderfully JOLLY. 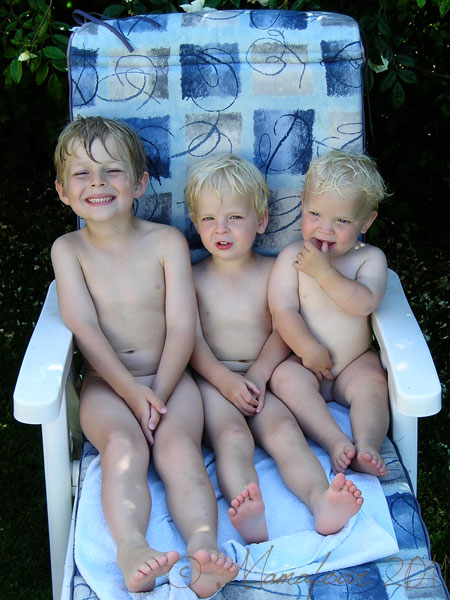 What I did not expect was the reaction of the boys. How at the tender ages of 8 and 9 they could be so wistfully nostalgic for those golden days of their ‘childhood’. How they miss the old toys we have gradually decluttered over the years. How they had already forgotten the way they played, their utter absorption in each other, the way they were three brothers, and yet one body of boys.

I did not expect to see No.1 slowly sadden and quieten as he compared his current slow and cumbersome self to that bright shining boy on the screen. The one he still is in his head.

I saw Boy watch, amazed and joy-filled as his small 3yr old self leaped about the floor with his daddy, playing, dancing, kissing and laughing together. Somehow, in the telling of his horrible anti-daddy 18mths stories, he came to believe he was a bad and hateful boy – one hour of home movies showed him this was not the case, and I watched a weight we hadn’t known was there be lifted from his small shoulders.

Jolly watched, amazed, as he fell down, giggled throatily, and got back up again. Over and over again. I quietly whispered in his ear, pointing out that the new moody tantrum-screech-cry he issues forth whenever he thinks he *might* be hurt isn’t the way he always was. That he wasn’t always so quick to fury, so fast to take offence. And as his family coo-ed and laughed and smiled and doted on the happy-shaped chunky bundle on the screen small pennies began dropping into place.

I love my big bold wonderful boys with every thing I have. But I miss my golden trio too.

Portrait of a Daughter