A few weeks ago, Blue was pottering in the garden, accomplishing her normal morning ablutions. I was standing on the patio, sipping tea, enjoying the damp misty morning air… and slowly came to realise she’d beetled off down the bottom of the garden, and out of my sight. I whistled. She failed to come. I called. No response. I called firmly. Nothing. I whistled sternly (oh yes, I can). Not a sniffle as a response. I shouted in a crisp and no-nonsense matronly fashion. Then in a rather threatening one.

Finally she appeared. Slowly. Rolling her eyes, head hanging low in a complete giveaway that she had been doing something she felt she probably ought not to have done.

As she approached I realised there was something sticking out of her mouth. Pretty sure it would be an undesirable something I eyed it as she approached. It became apparent it was a leg. One long dangly unmoving frogs leg.

I wasn’t sure I actually wanted her to open her mouth, not convinced I would actually see a frog on the other end of it. But she willingly spat it out at my feet – a largeish, and very dead-looking toad.

I scolded her roundly, picked up the toad by one foot, and plopped it in the bin.

Two hours later, I returned to the outside bin to place something in it – and was met by a very-much-alive toad waiting patiently to be let out.

Hurrah! The toad lived! I carried it down the garden and told it to hop it (sorry).

A week later we were working silently in the office when the stillness of the house was disturbed by much bouncy pouncy pufflings from downstairs. Descending to see what Blue was destroying this time, I found her sitting by the door, rolling her eyes in her usual ‘I’m-innocent’ expression… and The Toad on the play room floor. The Same Toad. The Same bedraggled I’m-So-Dead manner. Surely this time it had copped it? But no. The legs flipped, the throat wobbled and the eyes blinked.

Taking no chances, this time I placed it right at the back of the bottom hedge – I didn’t want to move it too far from home, but wanted to keep it safe from Puppy-who-needs-to-find-appropriately-sized-playmates.

Today, wandering indoors from Blue-in-the-Garden Patrol I spied what appears to be a big lump of poo on one of my Mocs (Fake Crocs. Yes I wear them in the garden. Yes they are pink. Yes they are puppy chewed. No I have no intention of replacing them). Sighing, wondering how I missed it, I reluctantly bent to retrieve the shoe and its attached mess… when the poo moved. 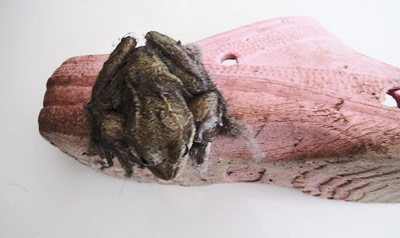 The Toad Was Back.

Covered in dust, hair and general under-the-washing-machine debris, admittedly, but alive and well and resting photogenically on my shoe.And tell me he doesn’t look like he’s grinning rather smugly. 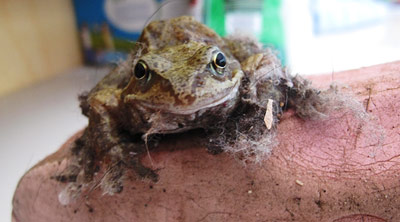 I’m starting to think we should name him, he’s so clearly keen to join the family.

Valentines Day. Or not.