Bear and Blue – the romance continues

I expected No.1 to love Blue, to welcome her into the family the way he has all his siblings with love, tolerance, and making sure they have a healthy respect for his No.1 status. And so it was – though I hadn’t quite expected him to fall so in love with her so fast. But he spends long hours talking, training and playing, and is happy to take on the chores of feeding, cleaning up and walking her too. He is also quick to reprimand her, and has no qualms with putting her in her crate when she’s being a nuisance.

I expected Boy to fall madly in love with her. It has his been never-ending wish for years on end to have a puppy, a friend in canine form to run jump and play with. But the reality of a puppy, the chewing, the unwanted energy, the interference, the refusal to sit still and be cuddled… in fact, the refusal to do very much that she’s told by him all has meant a cooling of his affections. She’s loved, but in a more realistic, muted she’s-hard-work-too fashion than we expected.

Jolly was one of the reasons we got a dog – he was frightened of all dogs. His face rather fell when she arrived those few short weeks ago, and he has found rather more reasons than normal to be in other parts of the house. He doesn’t like her mouthing and chewing, he doesn’t like her energetic games, and he’s nervous around her when she’s excited (which is most of the time). But. He talks to her every day. He wishes her good morning and good night. He waits until she is still and snoozing, to sit by her and gently stroke her. In return she is unfailingly gentle and patient with him. Rarely jumps and invites games, doesn’t jostle him, and when he is sitting with reach she frequently just lays down beside him, waiting for his attentions. Clever girl.

But Bear. Oh my. This I didn’t expect. I presumed a puppy would be too bouncy, Bear would be too silly, and they would simply jostle along side by side wihtout much interaction.

It’s a love affair. Of mutually enormous proportions. They play. Constantly. They have unending patience with each other. They cuddle. They tease. They provoke. They adore. They even read together… 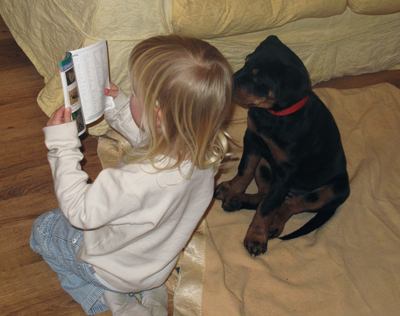 "...and this is the one where we see all sorts of butterflies..."

We went down to the woods today…