I just cheated a bit for LittleStuff’s Blog Hop – created a new post, but plopped it waa-a-ay back into 2005, where it needed to be (Yes, I’m still that shonky at back-filling the past. I’ll get there one day, honest).
But if you wanted to go take a look at what The Three looked like back in 2005, it’s here.

It really was the most precious of times. The 3yr old Boy had been…horrible. For months. Honestly. He was awkward, angry and utterly unbendable. And mostly at C. At some point, somewhere, C had committed some cardinal error. We never did find out what it was that he had done. And Boy went from hero-worshipping his Daddy to outright resenting his presence in the house.
But if Boy wanted Juice, daddy was not allowed to get it. If Boy was walking along the road, he would rather step in front of a tractor than hold C’s hand. If he was wet and freezing on a beach in February, he’d rather get hypothermia than let daddy carry him.
It was so bloody HARD. For so long. I tried to stay out of it, thinking Boy would have to relent eventually. It was the worst feeling just watching C try so very hard to make things right – and never getting through. And every single rejection slicing him like a knife.
I dealt with Boys tantrums and rages and general hideous toddler-ness. But never the implacable coldness that C got.
It wasn’t all miserable – there were lots and lots of fun happy times too. Honest. But every single day was marred by anger and fury.
And so little spontaneous affection from him. I have one oh-so-precious memory of a voluntary, out of the blue “I Love You” from a 3yr old Boy. Just one.
But slowly, in 2005, he began to thaw. C kept up his stealth campaign of unrelenting love and gentle affection. And gradually we watched our mixed up Boy gradually unfurl the beautiful, gentle, sensitive inside he’d kept so tightly hidden for so long.
Then, in the August, we went away to Pembrokeshire. And suddenly, there we were. No work, no pressure, no requirements on our days. Just we five.
And Boy finally realised that here, in this mountain of a man, was a soul mate. A man who loved him passionately. A man who protected him fiercely. A man who made him laugh all day long. A man to carry him when he was tired. To cuddle him when he was hurt. To buy him ChipShopChips for the third night running just because its what he likes best in the world. And Boy finally fell in love with his Daddy again.
They’ve not really been parted since. 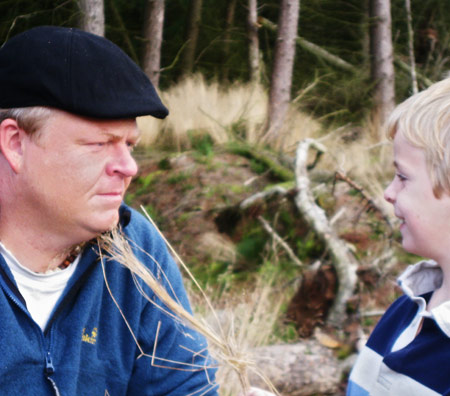