My biggest ‘boy’ turned 15 in January.
He is a hair’s breadth off my own 6′ height now.
His ridiculous feet are already a match for his Dad’s hefty size 11’s.
His legs are as hairy as a Hobbit’s, according to his amused younger brother.
His voice, though having missed the much-anticipated hilarious stage of cracking, pitching and diving, is descending lower by the month – and is still tricky to regulate in its volume.
If the light is in the right direction, there is a definite blonde moustache on his top lip.
His jaw is squarer, his shoulders are wider, his chest is broader, his hips are leaner.

He is morphing into a man before my very eyes.

Last night, he was hurting.

Hurting badly, way down deep inside. And there was nothing I could do or say to help.

His friends. That small, close knit group of polite, sniggering, silly buddies, had let him down.

They broke his trust.

My boy is a simple soul. Those he cares for, he cares for deeply, loyally and wholly. He trusts implicitly.
And all he expects is a similar respect and trust in return.

What I suspect is silly teenage nonsense went a step too far, and emotionally it has cut him in two.

And last night, I held my manchild tight as he broke the taught silence of the last few hours, and finally allowed the tears to leak.
As he asked what was wrong with him.
Why his friends would treat him that way. 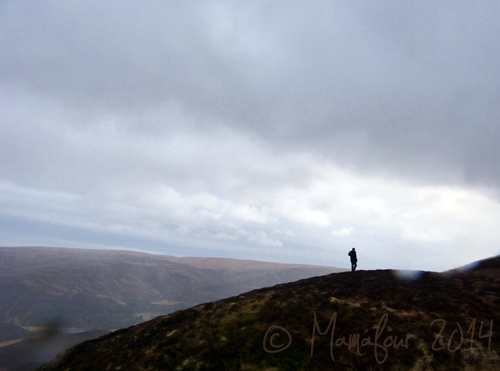 What could I say?

That sometimes people are just shit?

That he should talk to them and make it up?

That it didn’t matter, he should move on, that if they could act that way they weren’t his friends anyway?

When someone tells you these things, it doesn’t help, does it? Just because logically you know things could be worse, that you have lots to be grateful for – it doesn’t make you feel one bit better about yourself right then.

And I also couldn’t tell him that for well over a month I’ve been watching him like a hawk. Seeing his illness circling and hovering, feeling it waiting in the shadows, ever-present, nipping at his neck and his mood and his energy, just looking for a chance to pull him in again. I couldn’t tell him that while it was there his mood is less sunny. That his friends will be less patient with his autocratic commands when he’s tired. Less understanding of his occasional sudden inexplicable needs for silence and order and calm. Less tolerant of his slightly emotional reactions.

I couldn’t tell him that I’ve begun The Worry again. That I’ve started sneaking in to his room during the night, just to check on him. To reassure myself that he is sleeping peacefully, hasn’t begun again the restless, endless turning in pain and wakefulness.

I couldn’t tell him any of that, lay any of that responsibility at his door.

So I did the only thing I could do.

I held him tight.
I murmured soothing words of love and support.
I told him how genuinely brilliant he is.
I made him laugh.
I made him a scalding hot cup of tea in his favourite mug, and then I tucked him up in bed and smoothed his hair and kissed his forehead the way I used to do.
The way I haven’t for years now.

And he looked at me, this huge manchild of mine, with the shining eyes of my sad 5yr old boy, and he smiled through his pain, whispering

Sometimes, I guess all you can do is all you need to do.

Why I did the Ice Bucket Challenge