Actually? I’m done with it.

Simply fed up with No.1 not being well.

Today, the school called to say he’d had enough.

And I didn’t go and get him.

I told them to send him back to class.

The guilt wracked me for an hour, until he called again, and this time I practically ran to get him.

And yes, I’m well aware how that makes me sound.

He has hit a point where it’s just easier for him to give in than it is is for him to exert himself, to make himself plod slowly forwards even if he doesn’t feel like it. And that doesn’t help anyone. I do trust my own instincts – I do know when he’s genuinely done too much, had enough, and actually in need of me. And also the times when he’s simply a bit tired, overwhelmed, hungry, or feeling emotional – and just wants to retreat back to his home, to the comforting blanket of familiarity.

Having missed so much school, he still finds certain parts – the busy corridors in particular – utterly overwhelming when he’s feeling fragile.

But they’ll never get less so until he forces himself to endure them.

And then, in the evenings. When he wanders pathetically down the stairs, saying he feels *whispers* “Really BAD!” – when he hasn’t done his bedtime routine, when he has been lying quietly for no more than 30 minutes, when I know he is interrupting my small window of adult ‘me’ time not because he feels extra-ordinarily unwell, but because he is lonely, and hurting, and honestly just wanting one of us to go and soothe him, lie down with him, cuddle him for a while.

And more often than not we send him back to his room with a flea in his ear, with a brisk, “well, lie quietly then, get up and read if you need to, what do you want us to do?”

But for two and a half years we have been nursing, soothing, cuddling him through this strange horrible invisible illness.

And I’m so TIRED of him not being well.

The constant draining emotional need of him is so bloody wearing.

And simply writing that, no matter how true it is, makes me feel just a bit shitty. 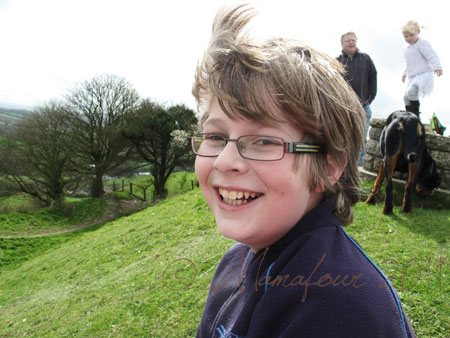 Portrait of a Daughter