Bear makes it to THREE. 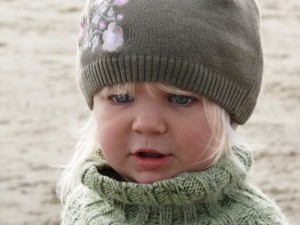 The thing about being the fourth child is that the big milestones seem.. well, a little less big. For No.1’s third birthday the grandparents came to stay, and we all took off to the zoo for the day. For Bear? Well, about 9.30 Wednesday night I had a quick rummage in a drawer and then debated with C about whether it was worth going out to get some balloons…

But I was a good parent, and I did go. And then I wrapped the small pile of presents (see? No.1 got a BIG pile. Now I just think “ah, she was swamped at Christmas, she really doesn’t need anything else”), blew up the balloons, posted them around the house, and put up the traditional ‘Happy Birthday’ banner in it’s expected slot. All whilst feeling a little wistful that my baby was so big now. Doing a lot of “oh, just think. Three years ago today…”-ing, and smiling sweetly at the memories.

So the morning dawns. Actually, scratch that…

It was still dark – around 4 in the morning when I was awoken by serious screeching and wailing. Staggering in, I find Bear standing up in her cot, hair on end, gibbering in terror.

Ah. Snakes in the bed again.

Being quite keen on getting a little more sleep, I did the only sensible thing – hauled her quick-smart back into bed with us.

So when the day started with the usual scary sudden blurping of the alarm clock, I not only shot up myself, but small pink person threw her hands up in terror also and whacked Daddy (who can always sleep through the alarm) on the head with Fig (ever-present long limbed pink rabbit). Happy Birthday!

On descending the stairs, Bear is surprised and thrilled at all the ba-yoons, but quietly confident it’s MY birthday, not hers. Jolly arrives to join the contented pile on the sofa – Happy birthday Bear!’ he exclaims happily. Grumpily she mutters “No, s’not my birthday. Is Jollys birthday. Ssshhhh.”
She’s not really a morning person.

No.1 is next to arrive, also with excited birthday greetings.

Small pink voice is raised in a growing temper now “NO! is NOT my birthday! Is Jolly’s birthday!”

Boy quietly squeezed in next to her – and his own whispered birthday greeting was rewarded with a whack of Fig round the head and a fishwife-like “NO!”.

In the next thirty minutes she proceeded to declare the birthday breakfast crumpets as yuk, screech at the boys for daring to sing happy birthday to her, rage in fury at the prospect of wearing a RED skirt (oh the horror) – and I do mean full on raging; greet her really very poorly Daddy who had dragged himself from his bed to see her open her presents with a “NOOOO! NOT birthday! Go AWAY!” and then as the grand finale she ran off to her hiding place behind the armchair, and point blank refused to come out without LOTS of physical resistance, and a lot more screeching and flailing and crying.

At which point we gave it up as a bad job – the boys got themselves ready for school, C went gratefully back to bed and we did the school run in baffled and dampened spirits. The boys asked for us to wait till they get home before we do the presents, so she had nothing all day. The grandparents rang – she of course refused to speak to them… and to top it all off nicely, we spent an hour of the morning in the doctors surgery waiting for the nurse to take some of my blood. With no toys, no magazines, and the heater on too high. I gave it up as a bad job an hour after our appointment was supposed to be and came home with all  my blood intact.

Still, she was actually very very sweet for the rest of the day, and it WAS her birthday. So here – this is my girl and her first three years… (and yes, I know there are typos, and no I’m not going back to correct them)…

This time, 11 years ago… where it all began.